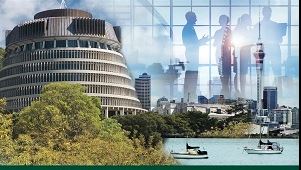 I don’t think anyone could accuse this government on sitting back and not doing anything about the almost exponential escalation of the property market. The same can be said about how the government has handled or rather is now handling the delta variant of the coronavirus.

However, the effectiveness of the Government policies to halt these metaphoric runaway trains is a whole different matter.

The kiwi-build baton which was handed over to the Labour party from the previous government was supposed to be the holy grail in solving one of our biggest challenges, a lack of affordable properties for first home buyers. When it came down to actually doing the job, the government found that the local authorities had different plans and were not used to bending with orders from above. And so, it eventuated, the grand plan of Kiwibuild failed which was seemly due to lack of consultation with the local authorities and players in the industry.(1)

This left the Government scratching their heads. This challenge remained and the pressure was on to also home all the homeless. So, the government set their sights, they were going to fix these two issues:

The Residential Tenancy Act was reviewed with the abolition of letting fees and no more termination of tenancies unless you have a government supplied reason. Although this move secured the tenure rights for tenants, the government was warned by private groups that the risky tenants will no longer be let in. If the exit door was barred for troublesome tenants was shut, landlords will wait for the perfect tenant thereby not achieving the goal of housing needy tenants.(2)

Eyeing up the statistics to show who these buyers are that are pushing up the market beyond the reach of the first home buyer, the Govt saw that it was glaringly obvious the investors were to blame. Hmmm, the govt thought, ‘We need to get tougher, lets extend the Brightline from 5 to 10 years, just to show them we mean business.’ (3).

The problem with this is that it was more the speculators, i.e. people buying a lot of property in a new subdivision and then on-selling six months later that were causing the rise in prices. The short term ‘speculators’ were bundled up in the statistics under ‘Property investors’ and so the latter became the bad guy. The mum and dad investors were not bustling shoulder to shoulder with the first home buyers at the Auction to out-bid them to acquire negative cash flow property. The writer spoke to several of these speculators, and they were fine with paying the Brightline tax on the profit, they would still make a small fortune.

So, a lack of being in-touch with the real world and not taking into account the mixing up of speculators and genuine investors in the same category.

In the writer’s opinion, although not normally a fan of controlling the market with a tax, If the government increased the bright line to 75% for the first 5 years, then they would have hit the beast right between its eyes and made a huge difference to the rising market.

The property market ignores this move and gallops forward..

‘Hang on, why don’t we double down further and fence-in property investors by taking away one of their largest tax deductions!’ (4)

This was a big hit for Mum and Dad property investors, the same ones that were providing the housing for tenants to satisfy the second of Labour’s goals named above. The cry of ‘Hey it’s not us, It’s the short-term property speculators’ fell on deaf ears.

However, the Government may have learnt a few things from the failure of previous strikes as this stick was accompanied by a hidden gem.

When the Government closed the doors to cash-flow positive long term investors, they also opened a side door to allow an exemption for new builds and for investors that rented out to community housing tenants. (5) On the face of it, in their minds, this was a perfect scenario to increase supply to open the doors for first home buyers, stop the rising market and house the tenants on the street. Problem 1 and 2 solved all in one foul swoop.

Not a bad idea, but of course as alluded to previously, the ‘property investor’ net was wide and the real culprits, the speculators, saw this as merely an insignificant speed bump on the road to making a fortune. On the other side of the coin the collateral damage from the innocent mum and dad investors were beginning to show.

There was almost an audible laugh as the property market moves into another gear..

The property market continued climbing unabated, ignoring the mis-directed intervention by the government.

Ok, so back to the drawing board, let’s make it tougher for the investors to borrow! The Central bank were then persuaded to place restrictions on LVR’s making investors come up with 30% deposit (later went to 40%) to buy an investment property.  A percentage of loans were still allowed over the new LVR restrictions but this was subsequently tightened for both investors and owner occupiers.(6)

Yet another hit at property investors and the collateral damage included the side lining of first home buyers.

So at this stage the market beast is still surging forward, ignoring the feeble mis-hits from a Government that doesn’t seem to know where it’s weak point is and no idea on what to do.

“Right” someone in the beehive shouted, “I’ve got it, let’s slow down the mortgages!’ If we make the banks scrutinize the expenses on the mortgage applications PLUS cement in a policy that the lender can only borrow six times their gross income, then that will do it! (6)

This new policy will take effect in December 2021 and is likely to further push down the first home buyers. The positive side to this move is that it will protect the banks when the mortgagee sales arrive over the horizon and all it is doing is keeping the mortgage applications and their brokers, honest.

Jack Windler from The Mortgage Supply company summarises this policy:

Everywhere you look more regulation and compliance is entering financial services, designed to support our housing market and protect the consumer.

The RBNZ attempts to influence house prices ultimately has come back to bite them with last years strategies to stimulate the market such as removal of LVR and interest rate drops, seeing this market take off like none other. The only thing that kept a lid on the market was an already tight credit environment with banks stringent policies and procedures still making it difficult to gain access to funding.

Now with both rate rises and LVRs back in place, we are getting another measure to stop the rapid increases in prices, DTIs. Two of the 4 Major banks have introduced this, one X months ago across different application types and in October one bank across all applications. It doesn’t mean all hope is lost, its about understanding the rules and playing the game correctly to get the outcomes you need

Strategies to overcome this:

Outcome: Yet to be determined.

In the meantime, behind the scenes, the quantitative easing that has occurred over the covid period, not only here but all around the world, is providing disposable income to families sitting at home under lockdown. If this was 1918 and not 2021, then the inflation may not have taken off as much as it has. With the advent of computers, it is very easy to hop on-line and inject oneself with that so-much-needed retail therapy.

The Dept of Statistics is showing the September quarter at 4.9%. The Policy Targets Agreement by the Central bank states it is to keep inflation under 2%, so increased interest rates were always going to be a certainty. (7)

“Ok, stop the press!” National and Labour have now come together and created a Housing Policy that will over-ride the RMA and the Councils growth strategy plans throughout the country. This is a huge move that will allow anyone in a single house zone to build three properties on their section.(8)

The exasperated cry of ‘that’s why Kiwi-build didn’t work and now you are doing the same thing again’ was snuffled.

This means infrastructure availability, character, parking and other local plans need to be kicked to the curb and a new plan be submitted from the Councils to the Government by August 2022. That’s nine months, too easy. Too much to write about this here so will be the subject of the next blog.

This can be seen as a war against the runaway property market (9) and the six strikes the Government has made so far, have hit the villages, some schools and maybe a few hospitals. The airport and munitions remain intact and the property market war rolls on.

With this napalm-like approach, it will have a slight affect as by pure luck alone, one of the strikes may accidently hit something that affects the market which may slow it down. In the end the interest rate increases will take its toll and the investors/home buyers will eventually be subdued.

The good news, at least for speculators/developers, is the Housing Policy on the horizon. I expect this to effectively create a new ammunitions plant to feed the war and the land prices will continue to soar!